What I learned writing a Fencing Story for GAMES CREATURES PLAY

Some basic principles: You wrap something loose around your off hand (left for most people) and you advance with your left arm forward. A classic example is a cloak. Some gentlemen would also have, for lack of a better term, a bicyclist's glove with very fine chainmail cover the palm and up to the front of the second knuckle; you'd try to grab the other person's sword.

Stance: You're going to use off-hand lead, which usually means your left foot leads as well. Much of the technique is learning how to conceal your reach with the sword in your primary hand, and there are tricks with the main sword's elbow and where your ribs are to give optical illusions to make your reach seem shorter than it is. Weight is about 60/40 on the back leg and the front; modern fencing is about 50/50.

These matches tend to be SHORT. You want to do enough damage on someone's lead foot or leading hand to get them to withdraw - in this, it's more like modern epee fencing. Depending on how you were taught, you might develop a habit of stopping there, which can be a deadly mistake against someone who was taught to beat, pull aside and go for the center of mass. About the only place where modern fencing truly resembles smallsword fencing is how quickly the matches are over - watch some Olympic fencing to see this.

Here's the thought process that goes through my mind with a blade in hand. Note that "thought process" is the wrong term here - if you're thinking, you're too slow; it's as automatic as knowing where your fingers are on the keyboard.

1) Where are his shoulders in relation to his hips? If they're not lined up identically, he's trying to conceal or extend his reach.

2) How bent are his knees? The deeper his knees are bent, the more reach he has without moving his feet, but the less lateral mobility he has. His front-to-back mobility is unaffected.

3) What's the ground condition like? Is there anything near my feet that feels like a curb, a loose rock, a cobblestone? If so, can I avoid it and lead him over it?

5) I have a mild form of kinetic synesthesia - I go into a very non-verbal thinking mode, a "no thought" space very easily. While in this space, I see vector arrows radiating out from the target I'm focusing on from their joints, and I "see" their range of motion. If I know where the back shoulder and elbow are, I know where the blade "can be." This helps a lot; other martial artists report similar things, so I suspect it's a mixture of brain wiring and training.

While there were more parries, EVERY parry (and every block with the off-hand) is meant to lead through to one of two things: First - get their blade out of line. Second - make sure that your blade is moving towards your intended target area, ideally in a way where their natural response to your parry is to push back on your blade and give you some resistance - this guides your blade back and makes you more accurate. One of the hardest lessons to teach is to teach someone when to go from what their body thinks is right (push back on the blade) to what IS right (don't push, pull away, let his muscles move the blade out of line).

Italian-style modern fencing retains most of the parries from a mishmash of smallsword schools - parry 1 and 2 are high line parries that riposte to high line attacks. Parry 3 is designed to keep your ear and neck from being sliced and ripostes naturally to someone's face or upper chest. Parry four is your basic deflection across the chest, parry six is the mirror of this to deflect outside. Parry seven and eight are the low-line versions of these. Parry 5 is used to defend against a cut coming in from mid-chest down to upper thigh.

Every single parry is taught, in small sword, with a step-and-pivot. You're also taught to parry with the off-hand FIRST, and to throw 'parry-step-counterstrike-pivot." One of the things that modern fencing lost is the emphasis on lateral footwork, and on aggressiveness. Most people's view of swordfighting from Hollywood try to emphasise fencing as some sort of "work out the holes in the defense and attack" routine - what it's more akin to is "see opening, exploit opening, think about it later if you live."

Don't forget that you can grapple, kick, leg sweep and pull/throw.

Smallsword was really the last time "sword" was taught as a serious-it-can-save-your-life martial art in the Western world. Pistols democratized violence; they didn't put nearly as much of a premium on training, reflex speed or strength.


T. J. Glenn (an old friend & fight director who has taught many of my friends stage combat) :
There were ... more parries used (many have all but been eliminated in modern fencing). with more attacks to the enemy's forward leg/thigh shin (French love to take out the support leg). They also kicked, which many forget, kicks to shins and forward thigh were common.

Charlie Williams
Modern sport fencing is more or less linear, as you are limited to the narrow Piste (marked off boundaries), and you are limited to using only your sword. This affects your stance, as you normally present only your sword side to your opponent. Also, in modern sport Fencing, in Foil you are limited to the torso as a target; in sabre, from the crotch vee up, but in epee the entire body is allowable, including hands and feet. In Period swordplay you have the freedom to move and circle, thus giving you a greater variety of angles of attack. Also you are allowed to use a gloved hand, cloak, lantern or whatever is handy to parry with your "off" hand, including a main gauche (sometimes referred to a "left hand dagger") if you happen to have one. Since you are using both hands, you tend to be more like at a 45 degree angle to your opponent so you can bring that of hand into play...  By "linear" I mean that you are basically only able to advance and retreat within the space of the Piste, pretty much in a straight line...

Note if you will that in most illustrations, the fencers take a peculiar pose with the sword-hand held high, before the face. This seems to be based on a standard Italian rising-guard parry that's intended to cover the head/face from attack.  Various manuals concede that head and face wounds are highly demoralizing.  Cuts to the scalp, though not usually life threatening, will blind a fighter... blood in the eyes, and sometimes they lose enough blood to actually pass out... or at least to faint.

Of course smallsword fighters didn't use the obnoxious whipping-attacks used by modern foil-fencers with their very light toy-swords, and there's never any right-of-way... that's generally limited only to foil fencers anyway, and it's just a training tool intended to teach students to cover themselves FIRST before taking a risk with attack. 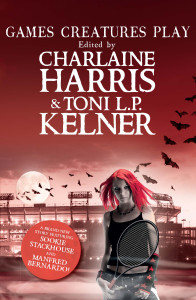 . . . . with a pretty hot ToC that I am so pleased to be a part of!  I do think the anthology should be subtitled "Stories about Sports by People who really hated sports when they were kids . . . . " -- Take a look at the descriptions, and you'll see ;)
Tags: fencing, short story
Subscribe